Snapshot Review: Vivitar was once a more well known and respected lens maker during the film era than they currently are. They produced a large quantity of high quality prime lenses that you can find on Ebay now for mere pennies compared to new lenses. This one is one of my favorites for the price that I use on my Pentax and 4/3 gear alike. I purchased this lens for a mere $20.00 plus shipping and it arrived in like new condition. Mounted on the 4/3 mount it gives a 35mm equivalent close focus magnification of  1:2.5 (35mm magnification is 1:5) and has a reasonably bright f/2.8 aperture just as the name suggests.

It is light, small, well built, with a dampened smooth focusing ring- the quintessential film era prime lens in terms of build and quality (they make them like this now, but not for this price!). Because the Vivitar has a better than average magnification quality, you have more control over out of focus areas and its more versatile than most primes in this genre. I find it quite a bargain. 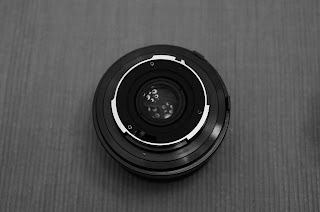 It has a 6 bladed aperture and ranges from f/2.8-f22. It is made mostly of metal and so is the mount. The focal length and price make this lens a great 4/3 or m4/3 candidate with an easy to find adapter. As long as you don't mind the Vivitar name, the lens is quite a bargain and highly recommended for it's price.

Take a look at this lens if you are shopping used for lenses you intend to use on adapters, or if you still shoot film, its a very nice film lens for an older MD mount Minolta film camera.

Cheers,
Carl
Posted by Carl Garrard at 6:03 AM