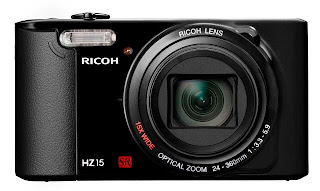 The blend of companies that is now "Ricoh" is starting to show fruit of the labor that merging creates. Ricoh now adorns the HZ-15, in a new camera that is Ricoh's first compact superzoom. It's got quite a spec sheet for a camera of this type, but certainly isn't alone in the world of superzoom compacts. Still, it's nice to see a Ricoh logo on a camera like this and I rather like the style. More on the HZ-15 below. This camera has been ignored in today's announcements, so I wanted to bring it to light for my readers. Ricoh UK published the press release, so it's apparently fair game! RICOH HZ-15 SEARCH