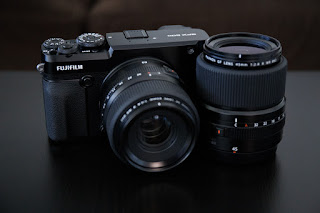 May has been an interesting month. Mostly cold and rainy here in Southern California, which is odd, yet par for the course lately especially in comparison to normal. We are rounding up a record rain season for our state.  And although the weather has been a bit more gloomy than usual, a ray of sunshine peeks in now and then. I guess this is a metaphorical sign, because a little ray of sunshine just arrived at my door. Many new cameras have come across my desk this year so far, but I never expected the GFX-50R to be one of them. When Fujifilm announced the GFX-50R upon the camera industry, I was blown away by it's design, even more so than when the X100 was announced years back. My very first thought was that it was the dream camera for me, never mind that it was a medium format camera, talk about icing on the cake. Likely, I'd never own one, but sometimes admiring beautiful things from afar is pretty cool too. Of all the cameras on the market, there are only three that were my dream cameras, of which I'd likely never get a chance to own or use. Fujifilm's GFX-50R is one of those three cameras.