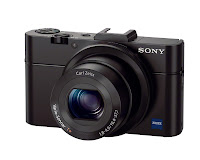 Back when the Sony RX100 was announced, I made some rather constructively critical comments about it. Here was a camera that I had decided was good, but certainly not as good as I know the Cybershot division was capable of. That is why I didn't jump up and down about it. Now a year has gone by and it looks as though all of  my major criticisms of the RX100 were addressed with the RX100 II. Good job Sony! So let me tell you first and foremost that I'm excited about the RX100 II and plan on getting my hands on one real soon.