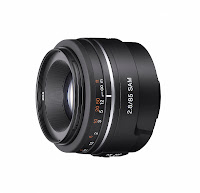 Sony 85mm f/2.8 SAM Review: In July of 2010 Sony released 3 lenses, two of which were from its newer budget line SAM (smooth auto focus) series. Of those two the Sony 85mm f/2.8 was introduced to give photographers on a budget an affordable budget medium telephoto portrait lens option in this focal range (which equates to roughly 128mm on APS-C sensor sized cameras). The 85mm f/2.8 retails for about $249.00 (Amazon price) in the US making it a budget lens indeed. The design is simple and lightweight, and comes equipped with a lens hood and front and rear caps. Typically lenses of this price range do not include a lens hood. More... Sony 85mm f/2.8 Best Price (Amazon) and