Voigtlander Bessa R3A Review - Handsome, isn't it? For the rangefinder fan in me, the Bessa R3a exemplifies rangefinder camera design. It's simple, affordable, well built, and beautiful. Its looks belie a camera that above all things functions well, and its form factor is designed primarily around that concept. Cameras that look nice but perform well  are, at least in my eyes,  the best of both worlds. Make no mistake, the Bessa R3a is a film camera- and it's glorious.

Voigtlander Bessa R3A Review- Writing a review on a film camera is just as rewarding as shooting film itself. There's a lot less to consider writing about and in some ways that is liberating. At the same time it presents a sort of headache for me in that for the most part it's a total 180 from the way I usually write. So I decided to just keep it simple (stupid) and slap down a sort of wandering report on the Bessa R3a, much like I did with the Maxxum 9 review.

First, lets talk about what's in the box.

The Bessa R3A comes nicely packed with all you need to get started, less a lens. It comes complete with a camera strap and lugs, batteries, camera case, and manual. Batteries are installed in the bottom of the Bessa R3A and you are ready to roll. Gotta love film cameras for their simplicity. Set your ASA/ISO to whatever film you are using and get going. 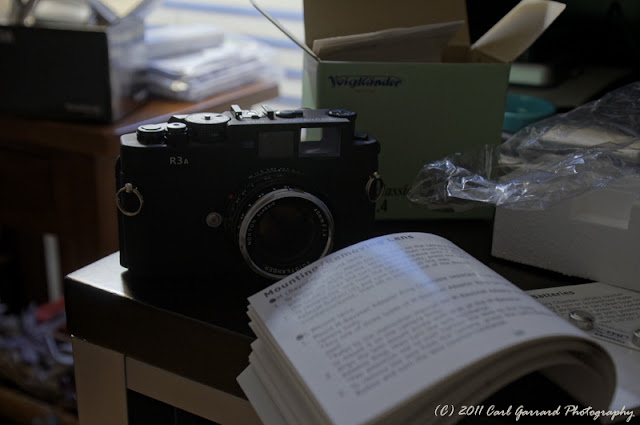 So that done, lets talk about size. The Bessa R3a is a pretty small camera, smaller than pictures might have you believe it is. I compare it here to a Canon G12 digital compact and only the width of the Bessa R3a seems to out bulk the Canon. Even the thickness is similar. This is a camera that by size and weight alone will likely make you appreciate having it with you. I'd say the Bessa R3A is very similar in size and weight to today's larger mirrorless cameras- only you get full frame for a very low price! 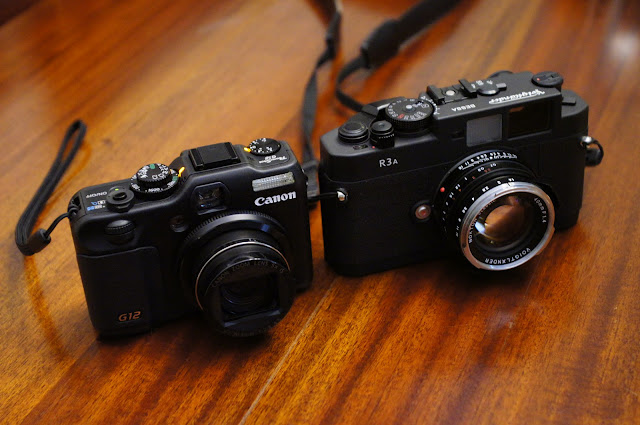 With a neck strap Ricoh GS-1 Neck Strap (For Bessa Too!)

the Bessa R3a is hardly noticeable even shooting all day long. Hanging from my neck over one shoulder, it tucked nicely into my side when not in use, but was quick to the draw when a scene caught my eye. Shooting with film changes the way you shoot instantly- you'll need to pick your shots more carefully and this takes time. Therefore having a  nice lightweight camera makes the process less tiresome and more enjoyable. Although the Bessa is substantial, it's no heavyweight at all. 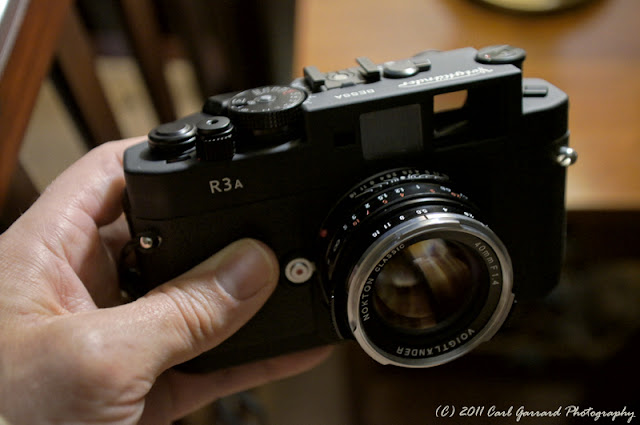 Practical Use notes on the Bessa R3A

The viewfinder is exemplary. Having a full 1:1 magnification on a full frame camera is quite the experience. If you think your full frame digital has a nice viewfinder, wait till you get a load of this one. When using the smaller frame lines at longer focal length lenses you need all the help you can get- so this is the reason the Bessa R3A has such a nice viewfinder. It's designed to start at 40mm and give you frame lines to 90mm. There is a switch on top that has 40,50,75 (and 90) frame lines ready for you.

Build quality is superb. The Bessa R3A is all metal with rubber grips, no plastic here. It's comfortable to hold with plenty of rubber grip on the front and rear of the camera- perfect in cold weather. Everything is built with an exact preciseness that only much higher priced cameras can match. Nothing falls short on build quality with the Bessa R3A.

Controls you need are perfectly placed. On the backside the R3A is equipped with a small AEL button (hold only, no lock setting) and the on/off switch is perfectly placed around the shutter release. The shutter itself is quiet, and a manual hand wind gives you control on the rest of the process volume wise. I made several shots of my baby sleeping and she never budged once from the volume of the shutter or winding process.

As with most "real" rangefinders, the viewfinder patch (focusing aid) can be a bit tricky to use in all but the best lighting circumstances. Rangefinder fans are known to like the challenge of getting the focus correct- but surely this process takes careful workmanship and a sharp eye. That is unless of course you use zone focusing methods that coincide with your aperture setting (many rangefinder users do), I prefer not too.

Otherwise frame lines are bright and clear and easy to use. I chose a "matching" Voigtlander Classic 40mm Nokton SC f/1.4 lens (SC stands for single coating) to match up with the Bessa R3a, and find that focal length nearly perfect for general purpose photography- just a touch wider than a "classic 50mm" FF lens.

Metering on the Bessa R3A is superb. I never once got an under or over exposed shot in over 14 rolls of film. This kind of metering has only seen its equal with my beloved Minolta Maxxum 9 film camera. Surely Voigtlander know what they are doing in the metering department.

Shutter release fires crisp and true, albeit a bit sensitive. I got used to it in less than 6 frames shooting. Afterwards I appreciated the sensitivity- it lets go when I need it too, not a hair longer.

When you have used up all your exposures, manually hand winding the film back is easy to do. This is as simple of a design as it gets. Depress the film lock release and wind your film back till you hear it click. Pull up on the rewind crank to open the back cover. Change your film, follow the instructions in the manual if you are new to film.

Using the Bessa R3A was a no brainer for me. I never had to pull out the manual once for any operation- but I'm used to film and digital cameras of all kinds. 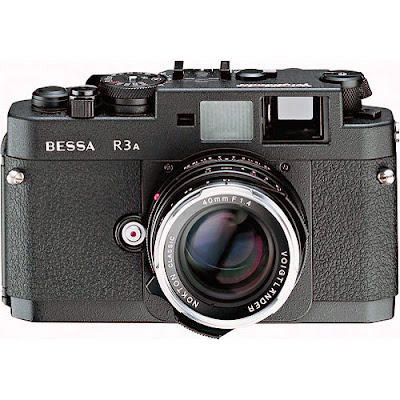 Although released in about 2006 or so, the Bessa R3a is as modern as film rangefinders come. The viewfinder is better than the Leica M7, and the price- lets not even go there. Having the ability to use aperture priority with an AEL lock button on the backside really fit in with the kind of photography experience I prefer.

The Bessa R3A is comfortable well built, feature packed (for a film camera) and has the competition beat in some of its specifications for a much lower price. There's nothing chincy on the Bessa R3a for near $700.00, and when you compare this camera to a Leica or Zeiss rangefinder you might wonder why you'd want to spend more money on those cameras with the Leica M mount.

Voigtlanders optics are also superb for the money- and some even swear better than the competition at much higher prices. Can't say I disagree with them from what I've experienced or have seen. If' you've been itching to use film for the first time, or want an alternative to digital again- here's one fine camera and lens combo I thoroughly enjoyed using.

As always, be safe and happy shooting.

(P.S. I apologize on the delay for this review Mr. Kobayashi! Now please make one in digital too!)