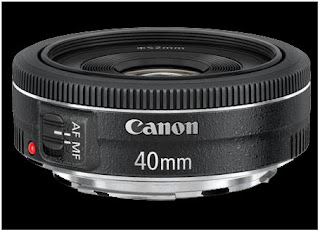 Canon EF 40mm f/2.8 STM Lens Review: Today I had an opportunity to be one of the first to use Canon's new 40mm EF f/2.8 STM lens shipped by B&H Photo (personal purchase). I am a big fan of the 40mm focal length for both full frame and APS-C formats, and as such this review will be completed using two bodies with this lens on both aforementioned formats. My test bodies are the Canon 5D and Canon 50D DSLRS for this review. When Canon first announced this lens I instantly purchased it even though Canon offered to send me a review unit for evaluation. And I let them know that too.
Canon 40mm EF f/2.8 STM Lens

Because of its specifications I knew this lens would be an instant "no brainer" for my kit (some of you may have read my comments on a popular website elsewhere) since I like the 40mm focal length more than the "standard" 50 on full frame, and the price is something awesome- just $199.00 USD. On top of that, the lens features Canons new ultra quiet (more on that later, it is indeed ULTRA quiet) STM auto focus motor (stepper motor), a metal lens mount, very decent maximum magnification, and curve aperture blades in an ultra light pancake package. I'm pretty certain there are a lot of Canon shooters that feel the same way I do about this lens which can pretty much be summed up as "duh, just buy it". And now, what Canon USA has to say about this lens:


From Canon: "The new EF 40mm f/2.8 STM lens offers an ultra-slim, lightweight design that helps photographers avoid overwhelming their subjects with a large lens and to remain discreet in sensitive shooting situations without compromising performance. The "pancake-style" lens boasts an aperture of f/2.8 making it an ideal lens for capturing portrait stills or stunning video. The lens is under an inch thick when attached, making it easy to carry and fit conveniently into a purse or pocket."


Canon EF 40mm f/2.8 STM Lens Review: Introduction
And now, what I have to say about this lens! First of all the lens comes packaged pretty standard in Canon's white red and black packaging with the normal stuff- front and rear cap (no hood included), warranty, and manual. For $199.00 USD I expected nothing fancy at all. 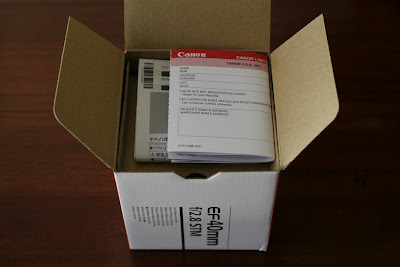 Compared to the Voigtlander ULTRON II f/2 lens, the Canon 40mm STM is a featherweight albeit with lessor build quality and roughly 1/3rd the price (note the smaller front element). Both are about the same physical size all said and done but the weight factor is a big difference. 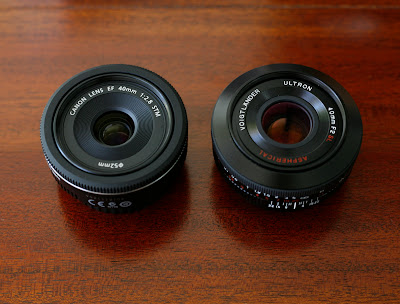 Canon EF 40mm f/2.8 STM Lens Review:
First Impressions, and General Operation
Build Quality: The Canon EF 40mm f/2.8 STM is built from fiber reinforced plastics and is very decent in this regard, even the lens tube that extends slightly outward is made from dense plastic yet the lens mount itself is thick aluminum alloy and should make for years of durable service considering its low weight. 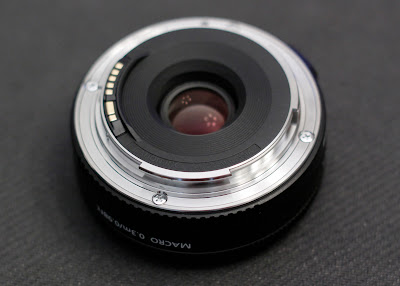 Manual Focusing- Focusing manually is done courtesy of the stepper motor, a focus by wire system that is nearly instantaneously responsive to the focus throw. I say nearly instantaneous because the motor can only focus so fast. It's no speed demon but I quickly adapted to it and find it to be very much like a mechanically linked AF ring- exactly similar to how Olympus do their focus by wire system (the best on the market). I've already seen complaints about the size of the focus ring but fear not, there is plenty to grip and it operates fairly smoothly. 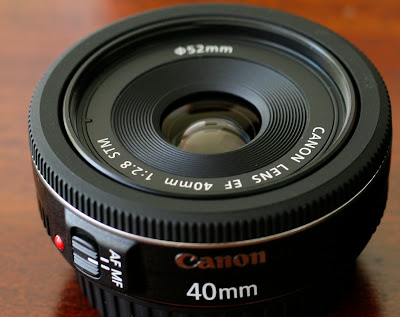 Other than that there's not much to tell. The lens doesn't have distance markers or a DOF scale on it, only a manual AF/MF switch on the side (no image stabilization either). This is as simple as lenses come but I am impressed with its build quality for the price. I thought, " looks like a little hockey puck, how cute" (I might be onto something there).

Auto Focus Speed and Accuracy- Auto focusing is again made possible by Canons nearly silent STM stepper motor, it's not the fastest focusing lens (certainly USM is faster) but it's no long telephoto lens designed for quick action anyhow. It gets the job done quick enough and really isn't a bother at all. If I'm not noticing how slow it is while shooting, then its doing its job good enough and certainly that was the case here. I didn't have any real issues with the accuracy of the auto focusing with either the 5D or 50D Canon DSLRS at any aperture especially wide open. Both of my Canon bodies have been very accurate with about 7 other lenses I've used on them so they were the perfect test bed in this regard.

Canon EF 40mm f/2.8 STM Lens Review:
Image Quality and Sample Images
Here is a set of test images at popular aperture settings for sharpness, vignetting, and auto focus accuracy. These are hand held images which I find to be more true to life test imaeges anyhow. That said, AF accuracy was insured by using the center AF point on both bodies on a high contrast area of the scene, and I focused 3 times on that section in a row to ensure a good lock.

I did not calibrate the auto focus on the 50D before hand because I wanted to see how accurate the little 40mm would focus right out of the box. The 5D obviously does not have focus adjustment so whatever the two communicate together is what I got and what you see. The caption contains the information on aperture settings, both cameras I used out of camera Jpegs for this part of the sharpness/focus test sharpness set to standard on 5D and +1 on the 50D. No vignetting correction was enabled on the 50D either, not that the 40mm STM would really need it on APS-C anyways. (Click on images for larger size)

First the 5D images on a 35mm full frame sensor:

Flare is somewhat well controlled although you can see in the image below that some color flare shows up in the most extreme circumstances (full sun through a tree at f/2.8 wide open). Stopped down flare minimizes quite considerably and overall flare really isn't an issue with this lens on the 50D but will show up (see blue color flare at top of image at f/8).  Canon 40mm EF f/2.8 STM Lens

Macro area isn't all that great on the 40mm STM but its certainly not bad either especially on a cropped sensor camera such as the 50D. This is no macro lens but better than other lenses in its class typically speaking and quite good for closeups considering you can focus all the way down to about 1' away (1/3rd of a meter).  Canon 40mm EF f/2.8 STM Lens 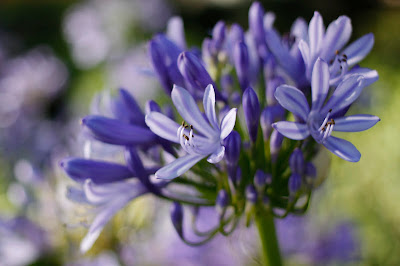 Bokeh can be a bit busy but that depends greatly on the scene you are shooting- mainly how far or close your backgrounds and foregrounds are as these to images (above and below clearly show). The image above and below were both shot at f/2.8 (wide open). Not a bad performance and in some circumstances can be quite nice/desirable.


Bokeh looks even nicer on the 5D samples with lots of isolation of the subject and pretty clean out of focus areas bordering on buttery smooth- not bad for a 40mm lens on full frame.

Overall the Canon EF 40mm STM f/2.8 lens is a lot of bang for the buck. Certainly better results can be had with lenses at different focal lengths in the max magnification (macro) and bokeh categories but the 40mm STM does quite well considering its price anyway, especially so on the APS-C format. Sharpness is never an issue at f/4 and beyond on both formats, and sharpness only gets better up to f/8 corner to corner where it seems to reach its peak when all things are considered (center is barely softer at f/8 vs f/5.6). Barrel distortion at least in field conditions, is slightly noticeable but not really a problem.

Vignetting shows up even on APS-C but nearly gone at f4. Any weaknesses this lens exhibits (very few) are more pronounced on a full frame sensor but this lens still performs well over all considering its low price. Color and contrast are just phenomenal at f/4 and beyond on both formats, a highly desirable trait indeed. Flare can show up in extreme circumstances so I recommend a hand/hat/hood to combat it if its a problem for you.

Ok enough of that stuff. Bottom line, am I happy about the 40mm STM purchase? Yep without a doubt this is a small and fun lens that I can bring with me anywhere and depending on where I go a great walk around or landscape solution when I need to go light. Also makes a great travel lens as well. Using it in the flesh is quite fun, and I happen to like how it manual focuses especially (I slide a finger back and forth across the bottom with my left hand). Having a 40mm pancake in the EF mount, especially at this price, is refreshing.

For video shooters the very little noise the STM focusing makes during autofocus might register on built in mics (if it does though it won't be very discernible), but not on external ones at all. This is my impression having used many DSLRS with video- this is indeed the quietest focusing lens I've used to date and that includes micro four thirds lenses.

Max aperture is fast "enough" for low light photo situations and it helps to create smooth out of focus areas when I need them.  This little hockey puck (my nick name for it) is a lens that can do quite a lot of photography work than you might realize. Just what I hoped it would be. It's ultra quiet autofocus is something to behold, something I recommend you experience in person to appreciate. Canon says its 18-135mm STM is even quieter but that's hard to believe considering how quiet the 40mm STM truly is.

For those who want a small prime that is slightly wider than the standard 50mm prime, this lens is simply a no brainer. It's not as bright as the 50mm f/1.8 II but it's better built, smaller, lighter, has better max magnification, and much quieter focusing which makes a big difference in some situations. If I were to recommend a prime lens to add to your EF/EFS mount Canon bodies, this lens would likely be the first. For certain the Canon EF 40mm STM f/2.8, or, hockey puck, is destined to be a hit (no pun intended).

As usual, be safe and happy shooting!
-Carl Garrard 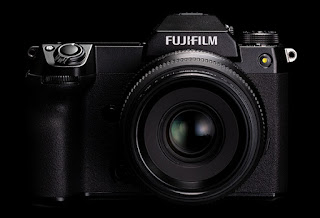