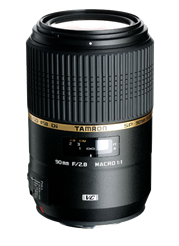 Woo hoo, another nice 90mm Macro lens. I reviewed Tamrons venerable older model so I'm quite excited to see how the new one performs. The older lens was tack sharp and made gorgeous images so its going to be difficult to improve upon that. Main improvements are the new optical design, addition of vibration control (VC), new sexy look, and USD (Ultra Sonic Drive). So a quieter, faster focusing, better performing optic is coming! Great news! By first impression this lens looks a lot like the very excellent 60mm f/2 macro that I fell in love with when I reviewed that lens at www.alphamountworld.com (both the 90mm and 60mm reviews are there). Can't wait to use this lens, sounds like it handles better and is faster and quieter to use in general. A great lens for portraiture more so than ever with those improvements.