Minolta Dynax 800si Project- A Review of Film Fundamentals
July 2013, Carl Garrard
The Minolta Dynax 800si project started with an idea heavily inspired by the great Steve McCurry (who's photography you are more familiar with than you might be aware). For those who don't know, Steve is the only person to shoot the last roll of legendary Kodak Kodachrome film, and he had only 36 exposures to make. You can view this wonderful documentary here and see the images here, I highly recommend both. Steve is a perfectionist and his exposures were absolutely spot on (no technical errors that I spotted), which is a huge inspiration for me.


About the Minolta Dynax 800si Project- This project is an exercise in photographic fundamentals, essentially a test of my years of photography experience- an honest testament to lay before my readers. I will expose, digitize, and post every single image I make with this film which will include a small explanation of each image. Bar any unforeseen technical errors with the camera, there is no reason I won't be posting all the images in this article. There is however a twist to this project- I've never used the Minolta 800si in the field before. I'm slightly aware of how to use it, but I've never shot a single roll of film with it.

Rules for the project: Keep it simple. I'm going to shoot one single roll of Ilford HP5 PLUS 400 ISO 36 exposure film

using an untested Minolta Dynax 800si SLR using Aperture Priority mode, Minolta 24mm f/2.8 and/or 50mm f/1.7 lens, and, without an additional flash to assist me (the onboard flash is allowed but I'm unlikely to use it). Tripod is allowed.

I'm going to try and limit myself to 30 days to shoot the entire roll, but I may finish sooner or a bit later than 30 days. The idea here is to get some results in a decent amount of time for my readers. After I've completed the exposures, a local pro shop in Southern California that I trust will develop the film for me and scan/digitize them to a disk. At that point I will finish this article and post the images.

There are many challenges I face with this project. Being limited to just a 24mm and 50mm lens means that I'm also limited to what perspectives I can capture. Secondly, an unfamiliar camera presents challenges to me because I don't yet know it intuitively- which ups the stakes here considerably. Lastly, I have to post every single image error or not to you, the reader, which puts a lot of pressure on me for every single frame. Lighting, subject, composition, and timing are going to be extremely important for me to get right every single photograph.

It is my hope that this project will serve to help me gain some allegiance with my film roots again, as well, to help revisit some of the core fundamentals that make film photography so rewarding in the first place. Patience and technique are indeed vital for film, much more than digital in general, and especially important for this project because I only have 36 frames to work with total.

Lastly, this project will sort of pay tribute to the late and great Minolta camera division, whom in my opinion produced some of the finest cameras the world has ever seen- both film and digital. It was a very sad day when Minolta quit the camera business. 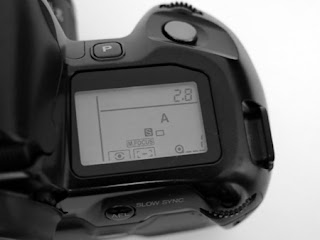 Film loaded first frame showing, so far so good. Off I go!

After I make notes on every exposure prior to developing the roll (as I take them), I'll later add all the images to accompany the notes after they are processed. This should be fun.

7-30-2013: Exposure 1- My daughter in pre-sunset light asks me, "Daddy wanna run?" Everything looked right especially her expression. And although the first exposure was more impulsive than I had planned, I had resisted many other "looks" tonight for this one image and I simply couldn't resist this moment.

8-04-2013: Exposure 2- At a local country concert at a park, I saw a little girl and boy meet for the first time. They were both under 3 yrs of age, and loving each others company. The boy was throwing a ball and the girl was running to go get it for him; as if she was his volunteer loyal servant. The moment in which she handed him the ball they smiled, and that's when I made this image. I incorporated the scene around us but isolated the focus at f/4. I found it to be an innocent and refreshingly positive moment of sharing and cooperation.

08-18-2013: Exposure 3- Rancho Santa Margarita, my home. This image was made during a typical day in my home town, and the area is the center of the city where we all meet for fourth of July, or just to get some exercise and see the view that you see in the background. Late light day, nothing too special here but to capture an average day.

Pentax K-01: A Marc Newson Sequel? October 2021, Carl Garrard   Of all the digital cameras that have come out in the last two decades or so,... 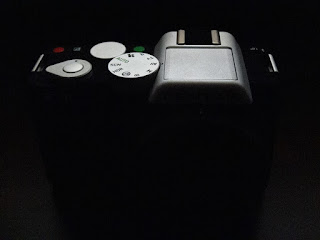