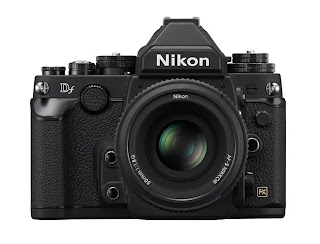 Yesterday Nikon announced an interesting camera- about a week after a buzz campaign had been on the net for all to watch. The camera to the left is touted to be many things by Nikon, but I'm not here to discuss what they think of the camera. I'm going to give my raw impressions on what this campaign and camera have left on me. The Nikon Df  is certainly a striking camera by any measure. The exterior exudes functionality first in design, that in the minds eye of this writer, also exudes beauty. Practically designed cameras have always seemed beautiful to me, because it is very obvious the design is meant to appeal to a working photographer.

External controls can be a great help or a great hindrance depending on how many or little of them there are. Looking at the Df  I'm a bit mixed. Lets start with the bad- the front of the camera. No it's a handsome camera, that's not the issue. The problem I have is with all the buttons and dials that are out of reach for the fingers when shooting with the camera. I don't like them personally. It's too much to remember when you have a camera to your eye to have to think about making adjustments on top, front, and the rear of the camera. Nikon Df Information Page

It's interesting to me that the sales campaign could be so focused on harmony and simplicity and yet, the very camera that is being touted seems overloaded with controls. There's a fine balance of too much and not enough, and I think the Df just tips the balance in the too much category. It's not just the controls on the front of the camera either, the rest lies within the menu system and the cameras behemoth list of specifications and features.

The Df thankfully forgets about video. However, the Df does not forget about live view. Considering the campaign, I'm not so sure that forgetting live view off the camera would have been a bad idea. That may be stretching it a bit far, but I'd be interested to at least see the reaction from shooters interested in a throw back camera that didn't have live view.

From the top however, I think the Df  is remarkable if not brilliant. The control layout and the vast amount of them, are excellently arranged and situated. This is the best view of this camera if you ask me, not only for aesthetics but because of operation as well. The EV and ISO dials are perfect, the shutter speed dial and drive switch equally so. I love the minimalist LCD and MASP control wheel on top as well. The shutter release is also noteworthy, shiny and raised with a manual release cable option being prominent. Subtlety, the on/off switch surrounds it- very nice. Well done on the top Nikon, well done indeed.

However, one out of three isn't going to do it for me, at least in the first impressions category. Nikon touts this camera as being a digital fusion, of the old and new. And while that seems to be a great idea in a board room (to appeal to the new and old) in practice, I prefer one or the other. I think that Leica are masters of bringing a simplified design to a new era, without announcing it from the bleachers nor abandoning their core philosophy.

In short, I'd have liked to see Nikon take this camera one step further in the classic category, and three steps backward in the fusion category. I may be alone on this thinking, but I do doubt that.

That said, the Df does intrigue me. Of course I'd love to take it out for a week alone in the wilderness or what not and get to know it. Hands on is always the final say for camera designs and my initial impressions could all go to the wayside. We'll have to see about that. I'm not saying that I'm going to run out and pre-order a Df either- in fact I won't. But I may be sent one by Nikon or, use one over the counter a few times to get a real life opinion of the camera in hand. I'll report more then.