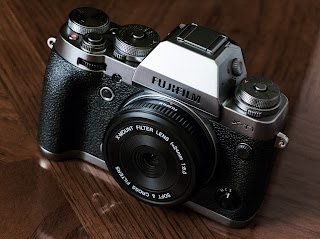 When I unboxed Fujifilms X-T1, the first thing I thought of  was Hansel's (Owen Wilson's) line in Zoolander (yes really).  This is one beautiful and supremely well designed camera that you'll be at home with either on the street, at a modeling shoot, or even at Mount Vesuvius. There really are only two types of cameras that get photographers hearts pumping these days- beautiful looking rangefinder (styled) cameras, and the classic SLR (style) cameras. Both types imbue an adrenaline based Starbucks cocktail mixture of emotions. Those emotions include: a dose of fond personal memories, a dab of historical significance, a warmed heart, and all mixed together with a little sprinkle of lust. Wherein Leica have pretty much nailed down the most beautiful rangefinders cameras of all, Fujifilm, at least in my eyes, have taken the award for the  most beautiful SLR style digital camera of all. The Graphite version of the XT1 (or XT2), in person, is the most handsome SLR, or DSLR style camera I've ever seen. Pictures simply don't do it justice, you do really have to see it in person to believe it. For serious.

Lets face it. We, the initiated, love our cameras. That is why you are here reading this article in the first place. Camera manufacturers do too. And they know that we love a camera that looks beautiful, for they are indeed photographers themselves. Together, we are all the same boat in that respect. There is nothing wrong with having some deep admiration of a finely designed product, or even one that just looks kick ass. Photography really, has become a blend of the love of the art itself and, a widely varying degree of gear fascination. Of course, gear lust can't be your only fascination, because we all know that will fade very quickly no matter how beautiful the design of a camera is. But I'm not here to put ink in your orange mocha frappuccino, we are going to have a belated celebration of Fujifilms X-T1 design achievement today.


The limited edition Graphite X-T1 even comes packaged with high quality classy materials. It's a dual box within a box design, with the camera box having a folding lid and a magnetic snap (delish) and the other box holding all of the other bits. A full printed manual is included too.Nothing is left out, even the hot shoe cover is metal and matches the color. Ooohhh so nice. I can't help but be a little reminded here of the way Leica packages their high end equipment. It's very similar, only you aren't paying nearly as much for an X-T1 as you are for say, a Leica SL. 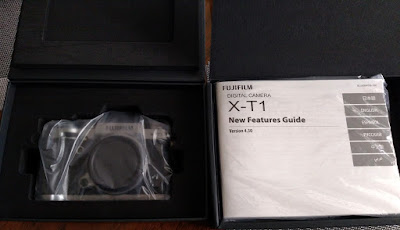 Just unboxing the graphite version of X-T1 gives you the impression of a very high dollar and quality investment. I hope some of you capitalized on the holiday deals big manufacturers were having because this camera is well worth its weight in gold.

So you might be wondering why I'm devoting an entire article about the beauty of a camera. Well, a couple of reasons actually. One reason why its important to have a really really good looking, well finished camera, is that it adds to the long term satisfaction equation. Secondly, it makes you want to use it, which is always a good thing. I go on and on here on this site about getting out there and photographing, so any extra motivation is worth reflecting to you.

Fujifilm make beautiful cameras, lets just face it. And I find that most cameras designed with a silver finish miss the mark of, class. Fujifilm seems to have nailed this color perfectly, and they rave about the multi stage process that makes the graphite color come to life, as well they should. From Fujifilm's site, the six stage process as follows:

It's not too shiny, not too dark, it doesn't weird with black or silver lenses on it, in fact it looks great with either. The heading photograph I took attempts to get the color I see in real life as close as possible in an image, in fact I think I did a really really good job there. I have found that many designs look great in pictures but in person the finish looks cheap or overdone, and the lenses never seem to look right on it. This is not the case here, its a winner.

And that matters because you want your stable of lenses to look good on it right? Mismatched equipment is cheesy and unprofessional. Sorry, just has to be said. But lenses look good on the X-T1, any of mine. 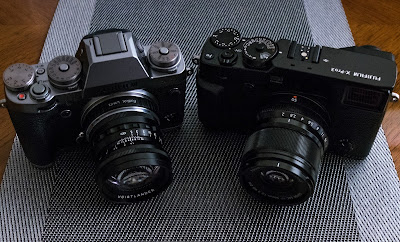 And before you get the notion that I'm a snob, just know that I can be at times (happy face emoji). But seriously, I mostly appreciate designs that are functional and ugly, but I like pretty ones too, even more so when they look... hot. And this camera just looks hot. I've had evaluation time with a black version of the X-T1 in the past, and it really looks good in either suit. But if I'm to pick which one looks classier, its the graphite version. It's not just the perfect shade of silver that they chose either, the finish itself has a multi-layered hardened kind of quality you can actually feel: it resists scratches well, feels nice and smooth on the touch, and does a great job of hiding dirt and imperfections (I have mostly black cameras and I clean them ALL the time). 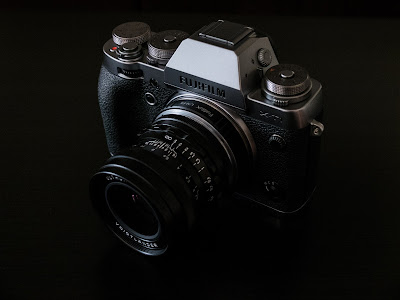 We all know that beauty only lies skin deep, but underneath its gorgeous shell lies a very capable and functional camera. I don't think any X-T2 owners regret getting the graphite color either, even at twice the current cost, for that matter. Yet I think that a brand new X-T1, at least for your money,... there just isn't a more beautifully designed camera can be had for the price on the market today. Olympus make some nice looking cameras, but not this nice.

Functionally, it's well documented as a proven functional design The viewfinder is exemplary; literally huge, detailed and clear (reminds me of the huge old SLR viewfinders I grew up with). It's weather sealed and rock solid. It's supremely capable today, even though it is first generation. Of course it's been succeeded by the X-T2, which functionally/ergonomically is even better in some respects (so too is its image quality), but as of today an XT-2 costs about twice as much to purchase. The X-T1 has a couple of little quirks of course, which is why the X-T2 is even more superior, but most of you will probably be able to live with those quirks just fine. So basically, the graphite kit version rules. It comes with a pre-installed mature firmware that makes it more fun to shoot. And what do you know, it even makes superb images!

With the X-T1 dangling from your neck matched with the right lens, there's no doubt it will impress both the photographer using it, and people like Maury Ballstein. I doubt you'll regret getting one. Slip one around your neck, walk down your proverbial modeling ramp of life, turn left, and give your subjects your best magnum. Dah-dah-da-daaaaaa! You earned it baby.

Feel like this article was worth a little orange mocha frappuccino donation? Donate here:
https://www.paypal.me/photographiccentral