Setting Up My Leica M8 for the Leica M-D

Setting Up My Leica M8 for the Leica M-D
April 2018, Carl Garrard 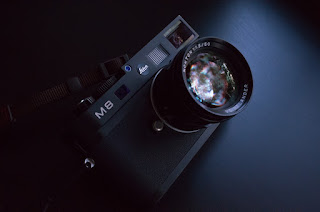 My Leica M8 still gets plenty of work. It's a unique and fun Leica M, and with use over time I believe this to be even more so than my "classic" M9 in some respects. Recently, I learned how to properly adjust the M8 for a horizontal RF adjustment because its focus alignment was slightly off horizontally, and a small adjustment was  necessary. I'm an independent type, so I'd rather fix it myself rather than pay then wait a long time for it to come back from being serviced. It wasn't a difficult job, but I took my time to research it and complete it properly. Along the way I had also acquired two OEM black Leica logos, and so I also replaced my red dot on the M8 with the black dot (which I think makes it looks much better). With the focus dead on, I made sure my sensor was clean, and bingo my M8 felt like new again. Now it was time to dig into the menu system and set it up in such a way that would prepare me for a new arrival. The Leica M-D.

Leica's M-D design is like no other digital camera, except one. I remember hearing about the Audi version first, the Leica M Edition 60 which ran $16,000.00 when it was announced.  This design obviously inspired the release of the Leica M-D. I believe it to be based on the unexpected positive reaction and demand from photographers. When I heard that the Leica M-D was announced in April of 2016, I was even more interested, but it was still out of my price range. Either way, $16,000.00 or $5,999.00, the concept and design planted a seed in my mind, the camera simply intrigued me like no other had before. At last, a bonafide digital film camera was produced. Fast forward to today, and it will be in my hands soon. And in preparation for its arrival, I wanted to see what the experience could be like by setting up my M8 as close as possible to how the M-D would come out of the box.

So I dived into the M8's menu. I turned on discreet mode, turned off image review completely, turned off the acoustic signals, and set the image type to DNG only (no Jpeg). Now all I had to do is go out on a short walk and make some images and completely ignore the playback button. So I did. I set out for a bit of a walk around my neighborhood and made about thirty or so frames, not once pressing the playback button. I did look down at the screen on the camera for the first and second shots out of sheer habit, but I can honestly say that I resisted playing back my images. Since auto image review was off, I didn't see a single one till I came back.

I am indeed happy shooting with these settings thus, I may even keep my M8 in this configuration permanently as a result. With practice and increased confidence, there's really no reason to review your images. Any changes to settings I needed to make along the way were to aperture only. It was a short walk, but with each frame I enjoyed the process more and more. When I came back and reviewed my images, I was pleasantly surprised. Almost every photograph was properly exposed and focused. Trust in your skills, be decisive, and you'll just continue to get sharper. Soon you'll know your lens and camera as an extension of the mind and body.


Although I'm an experienced photographer you would think that I shouldn't have been surprised, yet still I was.  Of the thirty five images, only one or two were slightly over-exposed and the rest were spot on. Focus was dead on too; with partial credit to new the Leica "mechanic" for that one.

A benefit that I didn't expect, was feeling calmer than I had been when shooting with the M8 before. All I thought about was just making a few frames. I didn't fiddle with the menu at all or review critical focus, no obsessions or bad  habits, just thinking my shots through a bit more before making an exposure. It's a very rewarding process, I dare say a proper process, so I recommend every photographer try this out. I feel even more confident that I am indeed ready for my M-D. And I will report my experiences here with that camera of course later.


Wrapping this up, I want to be sure my readers know that I'm aware this isn't nearly the authentic shooting experience that the M-D would give you, but it's getting in the ballpark at least. And for some of you who already own a Leica M, please try my settings and go give it a try. Because I must say, I really enjoyed this process and sharing it here. It's a much more simple and direct way to photograph- its just shoot and move on for the next composition. That simple.

Link if you wan't to gander at its crazy price increase.