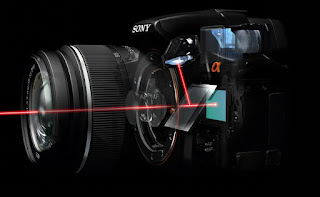 Our camera market continues to settle down into what it will become for the future. Like many of you, I was there during its meteoric rise that occurred before smart phones became more common place as everyday imaging devices. And like many of you, I've seen the digital camera market go through quite a few interesting phases after the year 2000. And through all that, I believe that we are now finally at the last stage of what the digital camera market will go through. Today, we have more than enough digital solutions available to us to accomplish our personal and professional photographic goals. As we all should know by now, digital cameras aren't the #1 choice for the majority of personal photography needs anymore. However, DSLR's, DSLT, and Mirrorless all have a place in the market and fill specific needs for dedicated photographers, and all three are necessary.

Sony has been willing to try anything it can to find it's place in the interchangeable lens market since it acquired Konica Minolta, and thus it's been somewhat of a roller coaster ride for those who invested in the Minolta/A-Mount. But I can truly say it may have been an even crazier ride for me than most. I put a lot of effort into spreading the word for Sony's A-Mount early on in my writing, more than any other brand. And I regret none of it.

Looking back now, it was good that I eventually learned to sit back and become a spectator to Sony's evolution, rather than be an emotionally invested patron. And for the last several years I have done just that. Somewhere along the line I stopped writing articles about A-Mount products as I changed my website, expanded my equipment and experiences, and forged new relationships with other companies.  I miss the community, and still have friends I made during this time to this day. Barry, Andrew, Henry!!!

Regardless of whatever has happened along the way, it seems that the Sony Alpha division has finally found a more comfortable niche in the camera market, having earned its place with the successful E-Mount. This is no revelation obviously. First they tried with DSLR's, then DSLT, and finally with Mirrorless. Sony has stopped production with thier DSLR's some time ago sadly. Will the same happen with SLT? This is a question that I see pop up not only in the community, but even with big press sites like DPReview and others.

I certainly hope not. In fact, SLT could be more relevant now than it ever was. I'll explain...

With EVF, processor, and sensor technology being what it is today (the core advantages of SLT), any slight light loss disadvantage that SLT brought to the table has long since been mitigated. In fact, I think the advancement of the technology of these three core components could be leveraged to show off SLT like never before. This argument is mostly evident in the A99 II already, yet there has been three years of advancement in these core components since it was introduced. If they spent R/D money on creating a new PDAF sensor for SLT, there would be no bottle neck for the technology.

So, what I hope Sony will do, is put together all the latest technology they have into a mid level SLT camera that falls under the 1K price point. This would compete with the Canon XXD series, the Rebel, and 3/5/7 series Nikon SLR', and quite frankly have the potential to blow all of them away. It is also key that it find the sweet spot in terms of pricing, and, be a well rounded package too. These days, brand loyalty isn't what it used to be, so if you just make a great well rounded camera you're likely to pull in buyers from the entire spectrum of consumers. Just make it!


For example, Sony's A57 was (and still is) a very well rounded camera overall for a great price. It became quite popular overall because of this, and remains a solid buy even today. During its time in 2012, Sony were up against very stiff competition with Canon and Nikon in the DSLR space, so it was a tough battle for SLT. The market has changed since then, a shift towards mirrorless has been Canon and Nikon's primary focus which leaves a window of opportunity has open for the A-Mount.

Now I think is the time to make another SLT camera. Sony must make it very enticing for the price however, so much so that new buyers or current A-Mount users can't ignore it. I know it can be done, and for very little relative investment into new R/D. Sony can't be concerned with competing with the E-Mount either, they just make great cameras and let the rest sort itself out.

Competition is good, even within your own line up. Be brave!

Now obviously Sony need to continue to focus on the E-Mount, that's a given. With more competition than it ever had, it makes perfect sense for them to divert most of their efforts to their bread and butter. That said, it would not be smart to let SLT go quietly away like their DSLR cameras did. There are still major advantages to SLT and the A-Mount, and even more so now with all the new technology that Sony has available.

SLT A-Mount retains two major advantages that come to mind immediately which have great appeal to professionals and enthusiasts alike:

1. Much wider range of lenses available- photographers like cameras, but they marry their lenses. This fact alone is a huge reason to keep SLT.

2. Separate PDAF sensor has the potential to always be more efficient and accurate than on sensor PDAF, hence faster and more accurate tracking especially so in lower light levels.

Other SLT A-Mount advantages over E-Mount include:

Sony need SLT as an additional offering, putting all their eggs into one basket is not a good idea, as evidenced above.

Our camera market is more and more becoming an exclusive enthusiast and pro market. Many enthusiasts have several types of cameras which include DSLR's and mirrorless both. The key to enticing buyers is really simple. Just make a really well rounded and competitive camera for the right price. Sony's A58 and A68 were competitively priced, but fell slightly short of being the well rounded SLT buyers wanted overall. Certainly both cameras have their fans, but even those fans have justified criticisms. When I saw the announcements fly by, all I could think is that Sony were cutting too many corners and not being serious about SLT, so I ignored them as a viable purchase. I'm sure I'm not alone there.

However, it should be said that the A68 was much closer to being a well rounded package of the two. Again, I think Sony cut too much out of it though. Limiting the shutter speed, reducing build quality, and using older LCD parts weren't enticing choices, and thus kept many users from taking this announcement more seriously. I have a different proposal than something like the A68, and one that I think Sony should consider. They should fuse the 6/7 series cameras into one model going forward, and update the A99II as well.

So let's say Sony made say an A78, for example. Included, should be an even more modern PDAF autofocus system, a newer 24mp sensor/ processor,  some level of weather sealing, and include the best EVF and LCD as well. Not only would that be a well rounded package on paper, they would suffer few additional development costs since the sensor/processor, EVF and LCD would be used on other cameras too. Further, its vital that this package come in under $1,000 USD. I think that would be a very enticing offer to current SLT users and breath life back into the system. Just a thought is all.

But it's not just a spec sheet that makes a camera enticing. Canon have proved that cameras can still sell well, even if they don't beat their competitors on all the specifications. What Canon do well, is that they make their cameras easy and mostly pleasurable to use on a consistent basis. Most of the time they make what they have just work well, as long as we aren't talking about the quality of their video (cough). You get the point. Eliminate frustrations and glitches, and just make a camera and its functions enjoyable to use. To me that is the magic formula.

Two or three solid cameras in the SLT lineup are all that is needed to keep the A-Mount going minimally. One or two at most being APS-C, the other being full frame. I don't think that is asking for much, and it will make Sony continue to appear stronger as a camera maker heading into the future. Slowly letting the A-Mount fade away isn't the right decision if that is the direction Sony are headed. I have no idea what Sony's plans are currently (they haven't made any official announcements), but I hope Sony don't end up putting all their eggs into the mirrorless basket.

Sony, please save a couple of your eggs for the A-Mount and SLT, it's worth it. Don't forget about your loyal base, it will harm your longevity in the market if you do. Honestly I think that would be a bad long term decision no matter how popular mirrorless seems to be these days.

And just to show my old A-Mount friends I mean business, I put my money where my mouth is. I just purchased the Sony A77II to support Sony's A-Mount, and also to do a review here. This will be my first full length A-Mount camera review in quite some years.

If you feel like I do about the SLT line, I think it is worth letting Sony know. In order to do that, your best bet is to join the community page and make it known. Here you can give them feedback on SLT cameras and the A-Mount.