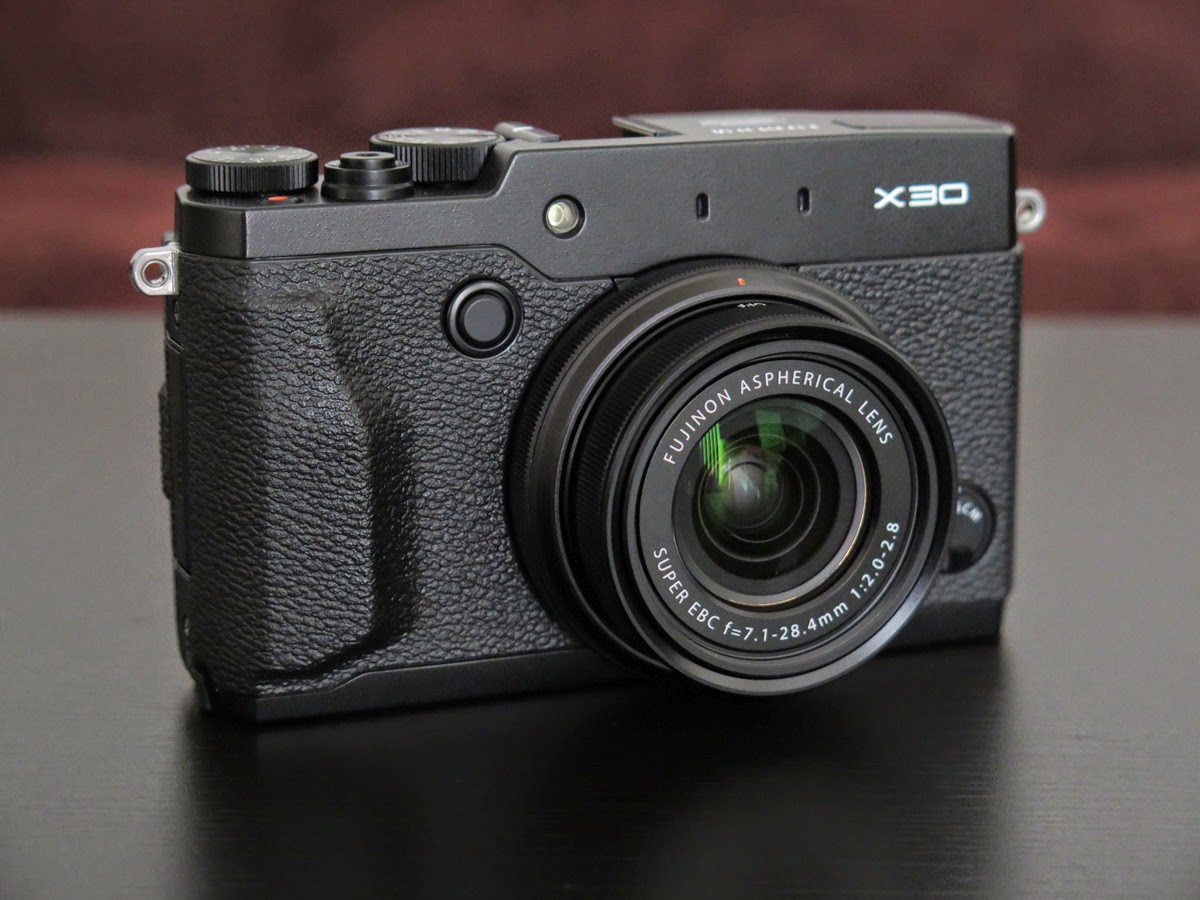 Fujifilm X30 Review- Fuji's X30 might just be the kind of compact camera that would surprise serious shooters the most. Why? Well that is what this review will explain. So, it seems to me that the many who've written the X30 off because its "only" got a 2/3" sized sensor might just be missing out on something really special. Hey, it's your money, I'm not going to tell you how to spend it. If you're like me though (seemingly in the minority), you know that a sensor is only one part of the equation when it comes to making a great camera. My review attempts to find out just how good a compact can be with all considerations made- not just considering a sensor size alone- and the X30 seems to be a perfect camera for this test criteria. *This review is being released in two parts- due to time constraints and other factors, part II will be released at a further date*

Fujifilm's X30 is the third iteration of a compact design unlike any of the competition. Its stand out features are its very large/excellent built in EVF, and manually controlled zoom lens. There are no other fixed lens compact cameras out there in its class/price with both implementations. The closest camera to compete is the LX100/RX100III, both much more expensive. Both of these features alone, make for a unique camera on the market for this price. When you add in its best in class rangefinder styling and external manual controls, tilt LCD, 7 customizeable FN buttons, a custom control ring, excellent menu system, top notch battery life, and very good XTrans sensor- it's a very capable and malleable compact and seemingly a lot of value for its current $499.00 price tag. You can choose silver on black, or black on black. 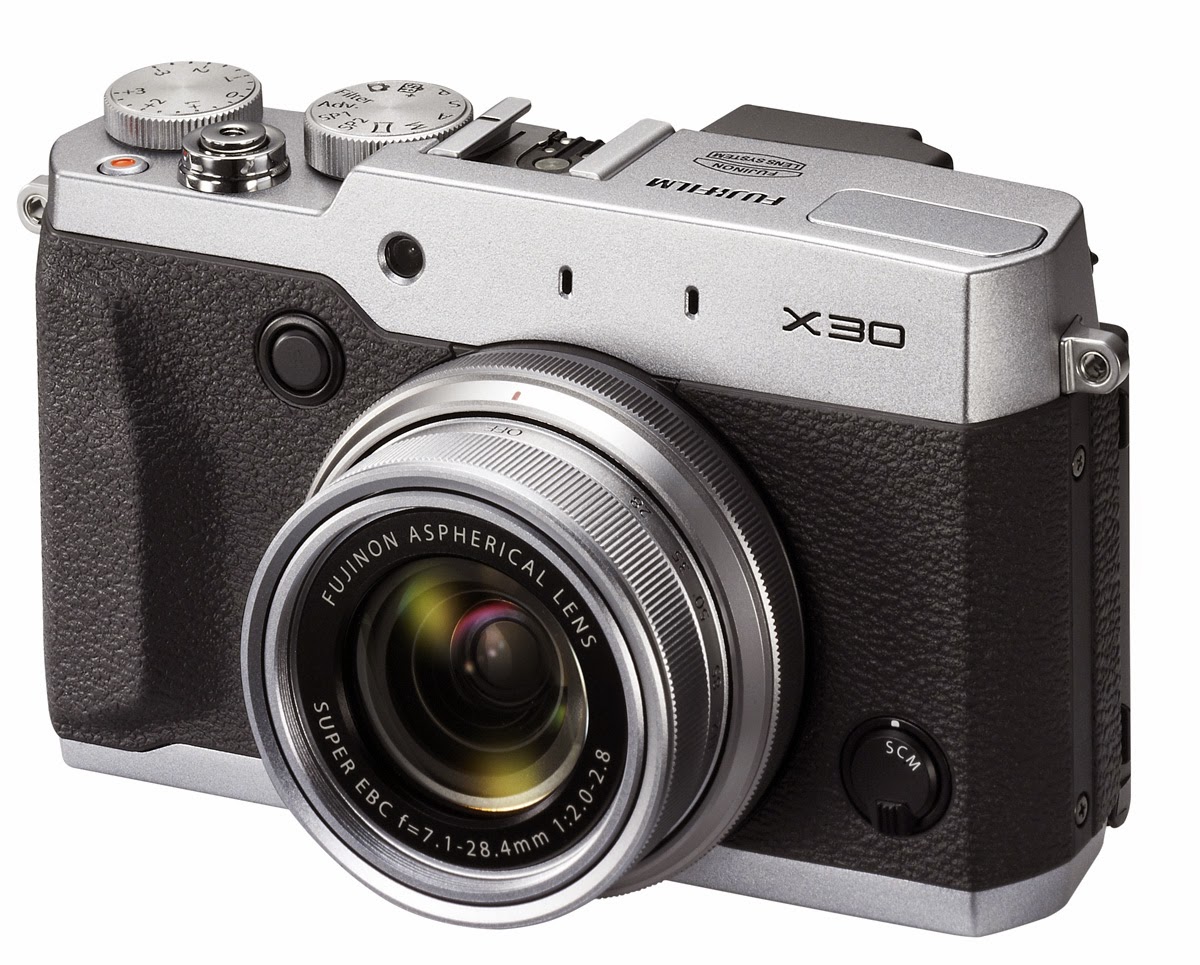 For more details and specs on the X30 just scroll to the bottom of Part II of this review...

You'll notice nicer than average packaging, sort of a Fuji trademark these days. There's a certain class to the packaging that matches the product design. There's nothing special about the materials of the packaging, its just very nicely designed. Fuji's certainly got style and class  nailed down with the X series lineup. 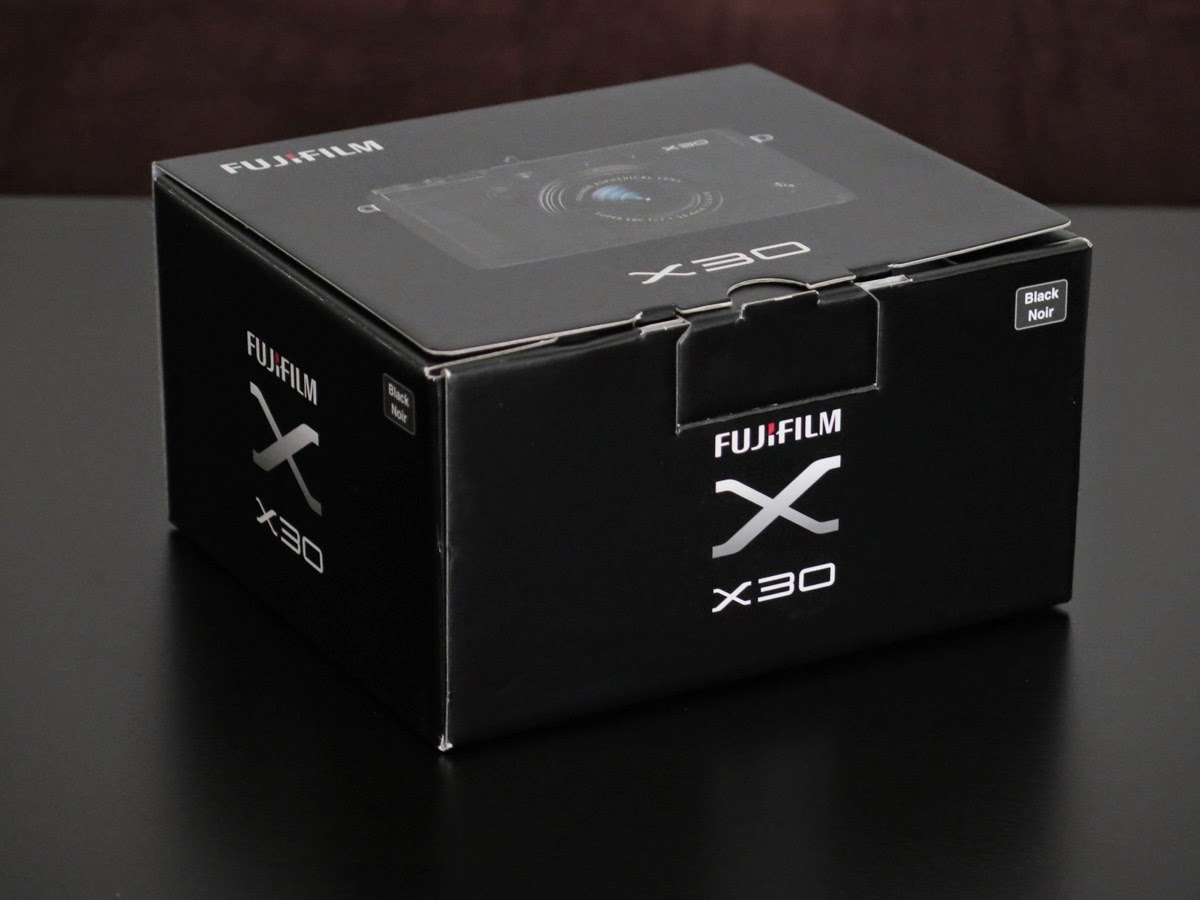 Niggles, let's get them out of the way. For starters, the charger can only charge the battery inside the camera (meh), but does have two outlet types- USB and a wall charger/converter. This saves production costs (I guess?) but my opinion is that I'd pay extra for a plug in wall charger. USB is nice to have though. My car has a USB, and so do many other devices in my household- charging the camera shouldn't really be a major issue for anyone who lives in the 21st century. 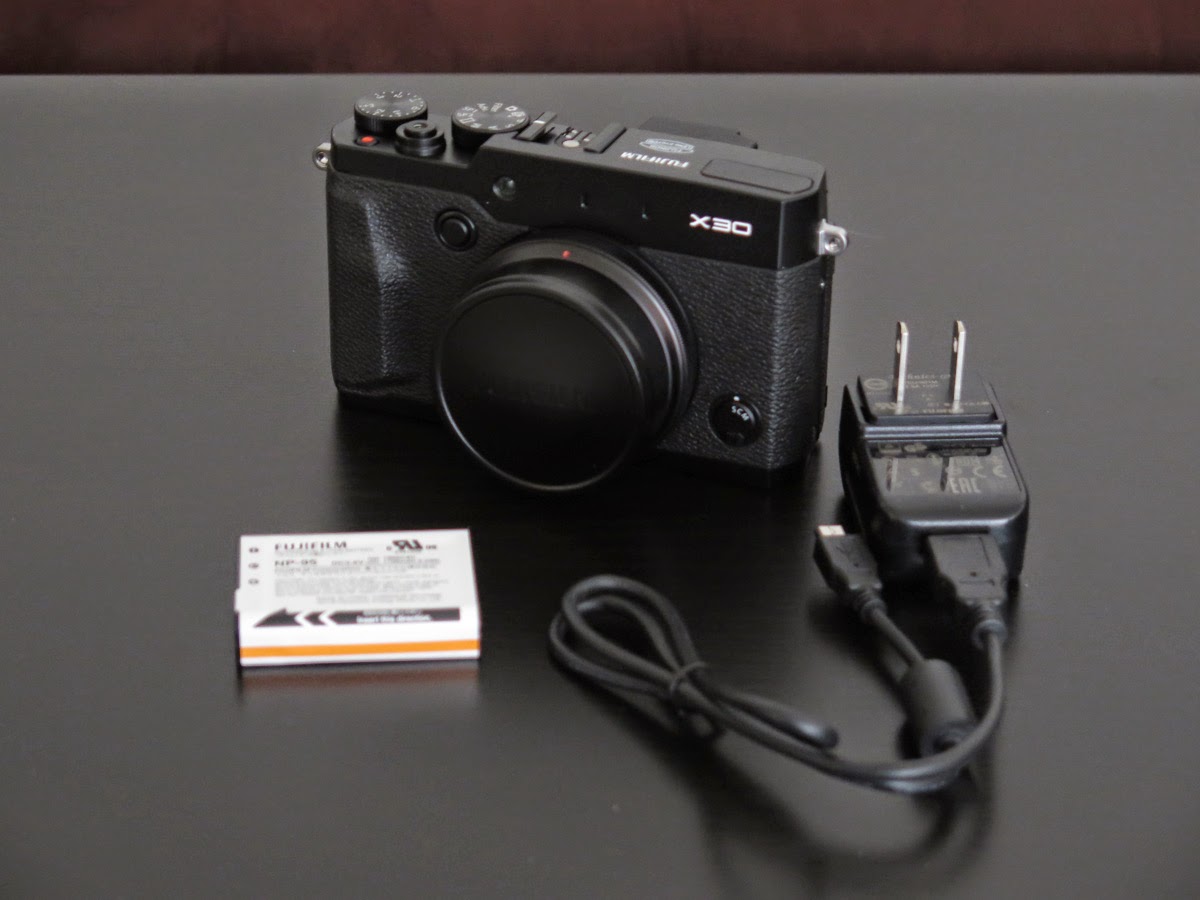 Post style neck strap lugs should be buried eternally from camera design as far as I'm concerned- they really bother me. But in the case of the X30, Fuji has managed to implement them on the shooting hand side so that it doesn't push into the bone when shooting. So despite my disdain for them, I'll live with it considering all of the X30's strong suits. I would much prefer flush mounted camera strap lugs like Canon's G series has.

And that's it for my niggles on this camera upon first impression. There are some quirks I'll share later in the review.

The X30 is handsome in the functionally designed sort of way, it's quiet, and it's discreet. I can't help but think of it as the ultimate street compact in just about every way. It's not like most enthusiast compacts, this is a camera that demands the photographer use both hands and get involved in the photography process. It's all about making a personal connection to the photographer.

I'm sure this was the intent of the Fuji designers starting with the original X10- and that's not a bad thing when you stop to think about it. There's no "lazy" photography to be experienced here. I'm just fine with that fact.

Personal choice was the black model obviously, the silver is pretty- but I mostly like black cameras. Just my thing. Regardless of choice of color the X30 is a beauty. In a way, I think the X30's looks are better than the X10/20 before it for two reasons.To me the X30 looks much more functional, true to its design roots. Sure, the X10/20 have that pretty glass viewfinder, but its not as real life functional or effective as the EVF on the X30.

And know that I love myself a great optical finder. I'm just telling it like it is- this EVF is exceptional for any camera, let alone a compact you can bring with you everywhere. Secondly, and much less important, is that the X30 is just more handsome.

The X30's grip is better than the X20, but I still want more to hold onto. I want it to be wider on the face plate, not thicker mind you. Another quarter inch wide, and I feel it would be easier to grip in the hand, less pinching to hold onto it, and more comfort for the shooting hand. Overall its pleasing, but I also purchased a Gariz case for it. This, along with the other items I purchased (see photo below), has helped the comfort of the shooting hand greatly.

As I told a friend who is a serious photographer and also interested in this camera, "the X30 is a camera you'll like; its small, but full of controls and plenty of room to use them. It's traditional, but also full of modern technology..." Fuji's X30 sort of represents a hybridization of years of photographic history and tradition, but full of modern conveniences and advancements of technology. I'm not normally a "hybrid" kind of guy, but the X30 seems to pull it off.

One thing struck me immediately- this camera is not a camera I'll master quickly, even for an experienced photographer and reviewer. There's so much that the X30 can do, it's almost hard to remember until you've used it for a while. For example, I kept holding it out at arm's length to shoot as I do with most compacts I use forgetting that I had a perfectly excellent built in EVF at my disposal. This is a first for a compact that wasn't a film camera!

Shooting at eye level has lots of advantages of course- isolating your eye to a controlled scene, and of course stabilization. I feel as though I'm retraining myself how to shoot with a serious compact camera- but the experience is pleasant indeed.

Autofocus is immediately impressive. Acquisition of subjects is very fast and shooting moving objects is surprisingly easy to do. Wait a minute, is this a retro camera with DSLR speed autofocus, what?

Fuji's X30 does not look like an action camera, but I'd not hesitate to shoot fast moving subjects that are within its focal range- it's that good. Coming off the XE2 review, I find the X30 to be a noticeably quicker focusing camera, which ups the versatility factor. Now I just have to remember to keep my shutter speeds up, something that I'll admit isn't my forte. A lack of good action photographs would not be the camera's fault, in this case. Just a surprising and excellent performance in the auto focus category- faster than my G16 without a doubt.


Fuji's X30 competes among my favorite serious compacts- Canon's G10 (yes despite its age) and G16, and my Ricoh GR. Going into this review, I was going to do a direct cross comparison- i.e. same class comparison. However, the X30 is such a different experience than any of my other compacts... the only real area I find it competes in is the fact that it's a serious compact.

It's just in a different class. Likely, you've never experienced anything like it. Still I love shooting with the powershots and GR of course- there's something very special about how the G10/G16/GR feel in my hand and how convenient they all are to shoot with.


With that said, I've switched gears a bit on how I approach using and reviewing the X30. It simply demanded it. Thus, I gave myself more time to adapt and evaluate it. This isn't like the Fuji X10 at all to me, its a much more refined and matured experience in every single way. And, since this camera is so capable, it's taken me longer than usual in a review period to try everything out as well.

Who'd have known for example, that the X30 would be so capable for action shots? It's so fast at focusing that it makes me want to shoot action with a camera in a class that I'd normally never consider shooting action with. And yet I digress...

The extra control ring and custom button for example, give me access to switch from ISO or shutter speed/aperture faster than any camera I've used before- all at eye level, and very intuitive. That took me some time to get used too but I liked it immediately. This camera gave me alternate ways of using controls to modify my shooting style if I so desired, and in many ways I already have.

There's so much customization too, the X30 frees you- but at the same time it also confines you to two handed shooting. Maybe I shouldn't use the word confine, perhaps empower is a better word. Thus, this is not an unpleasant experience for me mind you, its just such a different experience for a compact camera that I found myself smiling in surprise.

And with as many cameras as I've used and reviewed, it's truly nice to be surprised. This is a camera that kept me deep in thought about how its design opens up so many possibilities (thinking mans pose staring at the X30..), and it constantly begged me to pick it up and shoot with it.

Size wise, its compact- but it's not super small. Part of me wishes I could upsize everything about the camera to 130% of its current size. This is because the controls are so great and the camera is so nice... I wouldn't mind it being larger at all. If it were that much larger, maybe a 1" sized sensor could be fit in there- musing aloud here, just a thought is all. And, I'm digressing again, sorry.


As is, the X30 is a camera for shooters who want something small but with near unlimited enthusiast features. It's loaded, but. the experience of shooting can be as simple or complex as you'd like. It's a dapper camera, handsome, and screams take me out to the city and shoot all day. It's very well built, but I'd not want to take this out in nature really... for whatever reason it doesn't seem right to take it out in the wild- it would sort of be like hiking in a three piece suit.

While other compacts on the market (Canon G16 for example) offer a convenient shooting experience, the X30 offers quite a different experience in an equally pleasing but opposite direction. Fuji definitely have a camera that fits a niche- there's nothing like this camera on the market today in its class (unless you consider the X10 and X20), period. It's just a ball to use when you get it all set up.


Part II to follow which will include image quality results, a conclusion, and other matters... -Carl
Fujifilm X30 Light Speed Price Check