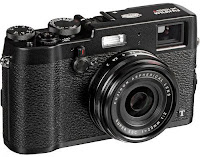 So you saw that I decided to review the Leica V-Lux Typ 114 and loved it (more than Panasonic's version too). Can't say the same thing about the Canon EOS M3 unfortunately. It quite frankly was a pretty boring camera. So off it went back to whence it came. Canon needs to do more work on the mirrorless lineup. While it was interesting enough to trial, it wasn't interesting enough to want to review- time is indeed valuable for me. So.... what's next? Let's take a stab at Fujifilm shall we? How about the X100T


Fujifilm has been on a roll lately and many of their recent cameras I have liked. I'm hoping the X100T intrigues me enough to put up a decent sized write up here for those interested in this sort of  niche traditionalistic-like companion"ish" compact type digicam... camera. I mean, what do you really categorize it as? I guess you could just call it a fixed lens compact digicam, or just digicam, but somehow that doesn't seem to serve its looks justice, now does it?

Still, overall I think Fujifilm's camera division has done an impressive job at creating a more defined identity for itself, both of its digital camera division and of its products in general. They continue to evolve and refine the products, the service, and the identity of this division and honestly they are the most interesting company to watch right now. That said, they still have a lot of room to grow in all areas, but that they are consistently improving is something I find admirable and enjoyable to watch.

Personally I like the idea of a full frame X100 like camera with a fixed 40 or 50mm f/2 or faster lens with a more simplified menu system and controls. I bet Fujifilm is already working on something full frame..... But, until they make something like that, I think the X100T may just be the best camera they have made since they got all revved up with the X series lineup a few years back when the first X100 was introduced.

We'll see though, won't we?