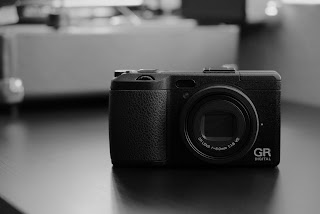 Why does this particular GR still matter? Well, it always will in the line up of GR lore because it's smaller, lighter, and has a faster lens than its bigger GR I/II successors. Ricoh's GR Digital IV is definitely a complimentary camera to the large sensor GR's with both types having distinct advantages that can give you awesome results. This camera is the reason the larger sensor GR's are as good as they are today, so remember that. Having met and worked with Ricoh under NDA with it's employees in the past, I can tell you first hand that they are all photographers that look out for our best interests in camera design, and it shows in the final products. The GR Digital IV is no different.


What's the GR Digital IV got that makes it so special?

Well first of all, it's smaller 1 1/7" size sensor has some advantages. It's capable of more depth of field for each aperture setting in a direct comparison, so no need to stop down nearly as much as the other larger GR's for sharp subjects. It's got a great CCD  sensor that performs beautifully seven years after its announcement. It's the most capable of all the smaller sensor GR Digital cameras, and definitely the best of them all.

The original Digital GR with its 8.1mp sensor has a wonderful look to the images that's hard to describe, but mostly likely due to its CCD sensor, and its unique grain pattern and midtones at higher ISO's. Thus images have soul to them, a sort of beautiful imperfection that gives it a distinct look.

The GR Digital IV has a very similar CCD sort of imprint on its images (good grain structure and midtones) too. As a result, I've been a huge fan of this camera since it was announced. The reason I believe it wasn't as popular as the larger GR's is because it was the fourth of its type, and there were only incremental upgrades each step of the way. The GR Digital IV gained image stabilization, fast AF, and the best image quality and build quality of all the small sensor GR's, and it was so well designed that even even 6 1/2 years after its announcement it's hardly feeling tired at all.

On top of it being a stellar GR in the lineup, it's also the lightest and smallest full featured pocket camera that retains excellent handling out there, even today. Others may be smaller (Canon G9X), but none of those smaller cameras handle nearly as well or have nearly as many features as the GR IV. Therefore, the greatest part about this camera, is how awesome one handed shooting is: the weight is perfect and light, and you can use two fingers to shoot in very odd angles as graceful as a ballerina, down low or up high, and never fear to drop it.

Its quick to focus, and you hardly ever need to ramp up the ISO past 400, but up to 800 looks fantastic (see above). Most of the time I keep it at base 80 ISO and just shoot a bit slower if needed, and/or meter for highlights and bring the shadows up in raw. There is plenty of dynamic range in the raw files at base ISO, you won't be disappointed especially for a small sensor. So, you needn't worry about the quality of the photographs, its 10mp files are sharp, noise free at base ISO, and look absolutely gorgeous all the way up to 20x30" (uncropped) with proper processing. I have no issues with it when metering for highlights and bringing up shadows in raw files in post. Plenty of dynamic range and great shadow detail retention with little noise introduction.

The image stabilization works excellent too, I can routinely get sharp images down to 1/2-1/4th of a second hand held. I cannot shoot with my larger sensor GR/GR II at shutter speeds that low. It's definitely got some advantages over its larger sensor successors in this are, and especially with macro photography. It's a winner macro camera.


I have every GR digital made in my collection and I have published reviews online for every single one at some point. But I keep coming back to this camera because of its fantastic qualities. GR's like the GR IV, will give you life long satisfaction where other digital cameras end up just being sold, collect dust, or end up in the trash bin. They will hold their value well; and this camera especially is, and forever will be a classic for very good reasons.

In my opinion, Ricoh should have not discontinued this camera, but rather should have introduced another version of it later with a small built in optical finder, perhaps with a 2.5" LCD screen which would have given it room to fit. With this configuration, Ricoh easily could have produced a small sensor GR and large sensor GR and sold both as different models and pulled it off nicely. And I still think they should. The older film GR's easily fit a good optical finder in its case, and even with an LCD screen the digital versions should have no issue doing the same.


Search my site for a full review, or other articles on the Ricoh GR IV, or click here if you are interested in an older review from 2011. Ricoh, we need you to stay in the business. GR's are your masterpieces, we await your next move.