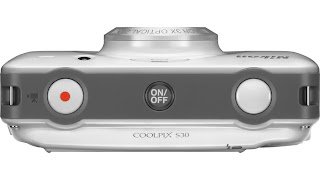 Nikon Coolpix S30 Review- No this isn't a UFO. It's not a DSLR review, or a big bad bright lens review. It's a point and shoot review. That said I probably just lost about 90% of readers with that last line, but for those of you still with me we're going to have a little bit of fun. As you can see, I've decided to do a review on a camera that is much different than what I normally decide to review. I chose the waterproof, shockproof, affordable, Nikon S30 point and shoot camera. Why did I decide on this one?

Nikon Coolpix S30 Digital Camera (White)
Ahhh great question! The short answer is for fun. Simple as that. And no, Nikon did NOT ask me to review this camera or any camera for that matter of late. That's the joy of being your own boss, you choose what you want to do and when. And I'm sure readers appreciate the fact that I'm honest like that. Anyways,  the longer answer is that I wanted to review a camera class that I've completely ignored, the super budget class family camera- if you will. I chose three finalists to review before coming to conclusion to review the Nikon S30. The Minox DCC 5.1, the Sealife Mini II, and of course the Nikon S30.

All three cameras are in what I consider the "odd budget class", cameras under $150.00 that are off the beaten path and almost aren't on the radar at all. I had to search for all three on B&H to find them (they have such a good web interface for buyers, don't they?). Of course they were on Amazon too but not nearly as easy to find there.

Anyways I'm digressing. I thought it was time to do another "different" review, and I've found one to do. And again, this is a throw back review considering the S30 is already superseded by the S31 which is a little more waterproof and drop proof. But for $79.00 brand new at B&H Photo, lets see what this little guy offers to lets say, the family photog? First my "stand out" list that is becoming somewhat of a common habit in my reviews of last. Whoa, a standard in my review is taking place? Stop the press! Anyways, the list Carl, the list-


Not a bad list for $79.00 is it? I think what makes this camera is the fact that its a capable little basic point and shoot for $79.00 but that when you add in the fact that it's water proof and can take a bump or two for that price, it really ups its overall value. This is why this camera made the cut in the top three out there when I had so many cameras to choose from. Not too many cell phones I know of are waterproof, and none for this price. So all cell phones are beaten by this little guy, right off the bat.

Ok so enough about the spec sheets and what it looks like and what I like about it and all that prior to using it... how does this little guy perform? Well this really won't take long, it's a simple camera. And in a way that's rather refreshing considering what I normally go through in a review. So lets get on with it.

Nikon Coolpix S30 Review- First Impressions: The Nikon S30 is a handsome devil in terms of symmetrical design and those looks translate into a simple to operate experience. Two big top buttons denote still from video shooting, and the center for power. The flash, lens, and tripod mount are all in the center as well (with the latter being slightly off center, but you get the idea). The rear is sensible too, with five buttons and a multi-controller, that's it. For a family camera, it's as undaunting as it gets, but it shy's away from being overly simple which sacrifices features for the mere sake of simplicity (that's just jargon for a camera manufacturer being cheap- there I said it). It fits comfortable in the hand, has a nice thumb rest, and buttons are all within easy reach and easily in sight where you need them to be.

I'll be honest here. Having so little overall control with cameras functions and what not takes some getting used too. I'm used to really advanced cameras coming across my desk for review, so this camera presented a challenge to be open minded. I can't be biased based on what I normally use.  I constantly reminded myself that this camera is for the person that isn't into photography like I am, isn't interested in having tons of features, and could care less how much control they have over the camera at all times. Nope, they just want a camera to be there, to work, and to take decent pictures of the family or whatever- so in that respect, it's designed well. When I got over the fact it was just a simple image making device, it was easy to like the S30.

Oddly enough, I'm eerily reminded of my very first digital camera, the Sony P30 (odd the name is almost the same) where simplicity was the name of the game, not control or features. So in a way, it's a step waaay back to my digital roots that started in 2001. So using the S30 has been interesting. You get a lot for a little these days and the camera works just fine in most every day circumstances. It's focus is a bit slower than more expensive cameras in low light but so what- it's not expensive. Also, forget about any manual control really, it's true to its camera type- a point and shoot.

Nikon Coolpix S30 Review- Menus: Changing some functions like exposure compensation, color temp, and saturation levels are still your choice if you wish. Also, you can add some effects after making an image too in camera. So it's not totally automatic and that's kind of cool.  Also, you can set up the camera to shoot consecutive images, and with an interval timer that will shoot one frame every 30, 60, or 300 seconds. It has a diorama (miniature), soft portrait mode, highlight color mode, and a fireworks mode too. Pretty much gives you a bit of fun stuff to try and all work reasonably well.

Nikon Coolpix S30 Review- Battery Life: Excellent with two eneloops. Period. I didn't test regular alkalines, those always die fast. So sport a couple extra bucks and get eneloops. Our whole house of electronic items uses them, they are a lot of value for the money. Don't want recharables buy two lithium AA's and get about 800 shots with them, yep, they are that good. The battery access is a two stage sealed door process and your SD card is also under the two separate sealed doors.

Nikon Coolpix S30 Review- Image Quality: Don't expect miracles, and you'll probably be pleased. The 1/3" sized sensor and Nikon processor will probably beat most cell phone cameras in image and video quality right off the bat. The fact that it has a real internal optical zooming lens (behind a sealed window) means that you'll get more for your buck by far over a cell phone camera. Most cell phone cameras have a fixed lens and have digital zooming (cropping) of the native resolution. No thanks for me. In good light the little Nikon S30 will make very nice looking 8x10s with punchy contrast and good overall color images with low noise. This is a camera made for the outdoors in good light, so use it there and you'll be plenty happy. Make a print from it too, my first 8x10 looked pretty darn impressive for a camera of this price. 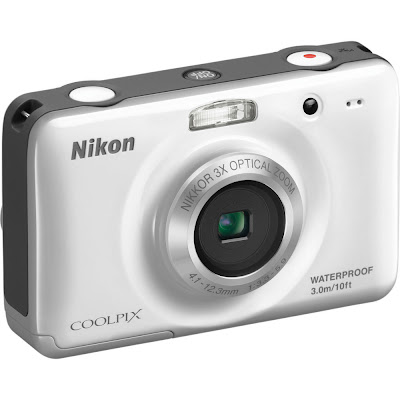 Nikon Coolpix S30 Conclusion- The Nikon S30 has some intangible likeable quality about it I can't express in a review. It's a summation of its charming design, simplicity, excellent price, and no nonsense fun only nature that leaves me smiling (suprisingly). That I know I can take it into the water with me if need be is a real treat, and my daughter loved using it in the bathtub too. Hey, if it makes my kid smile.... It's worth it's weight in gold.  My daughter gives it a thumbs up, so will I. Heck of a good buy if you aren't being a techy geek and just want to (shocker!) take a picture with no fuss. Just don't expect a lot from it and you won't be disappointed. If you want a more serious waterproof shock proof camera, be prepared to spend at least twice as much. Otherwise budget shoppers will probably feel like they got a lot for their money.

As always, be safe and happy shooting.