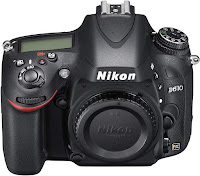 Readers may be surprised to see that I'm writing about a Nikon DSLR. This site is almost void of any Nikon articles in general. Although I haven't been a fan of many of Nikon's cameras (none of the Coolpix cameras for example), there are a couple that I have liked a lot. Nikon's D80 and D90 are two such cameras that made sense to me and that I enjoy using. And lately I picked up a Fujifilm S5 PRO, which I adore, built around the bombastic D200 body.  That lead to me being curious about their full frame offerings. And after much debate and weighing pros and cons, I ended up getting the D610 that addresses a couple of my beloved 6D's short comings.


Part of my motivation of getting the D610, was a lens. Nikon's fantastic 70-300mm f/4.5-5.6 AF P lens ticks off all of the important things I expect for a trail birding lens, and works well on the D300S I'm currently using. It's not compatible with the D90/80 cameras, but is with the D610. Nothing wrong with the D300S, but if I can get better IQ without sacrificing the AF performance of the D300S, I will use that camera instead.

On top of that the D610 addresses a couple of weak points of the 6D which, have never really bothered me, but would have been "nice" to have. It's got greater dynamic range, a bit faster continuous shooting speed, and a headphone jack for video. It gives up the 6D's stellar low light center AF point (best I've ever used on any camera) but that is a trade off I'm definitely willing to accept considering the D610 has an AF assist lamp the 6D lacks. Make that 4 short comings.

So I may write another article soon after using the D610, for now, it's a promising body to use with new lens I've purchased for my outdoor activities (mainly birding). It seems a nice weather sealed pair, and that is what I needed with the upcoming winter months in CA. I can use weather sealed lenses on my 1D Mark IV, but, I'd rather have a lighter outfit if I can get away with it for hiking. Specific stationary birding outings will continue to be used with my pro Canon gear.

The more I read about the D610, the more I like it. A camera I've pretty much ignored since it's release (and associated press to the D600), which seems to have a very good reputation and following. Will the D610 impress me more than my beloved Canon 6D, and give me more than I bargained for? We shall see!