This is Digital Photography Review Today.

Today, I deleted as much information on my account at Digital Photography Review that I was able too, I've said goodbye to that site, permanently. I had been a contributing member of that site for well over a decade. The reason? I was "sandboxed" by DPR staff for, frankly, being honest and asking questions about why they removed (shadowed) comments from a controversial Sony article they posted. In the comments section they were questioned or commented on by many members about their apparent bias towards the brand. I asked twice, on a forum post. I only asked twice because my first post didn't appear the next day when I checked on it. Thinking it was "user error" I asked the same question again. Then, "Mako" the moderator, tells me that I have violated some rule in which users are not allowed to question why posts are removed, and sandboxed me. I didn't ask about a post, I asked about a comment section in a Sony article. I was not warned at all, I was simply "sandboxed". In other words silenced. Thou shall not question DPR decisioning, apparently.

Today's front page of DPreview looks like this (December 2nd, 2019). 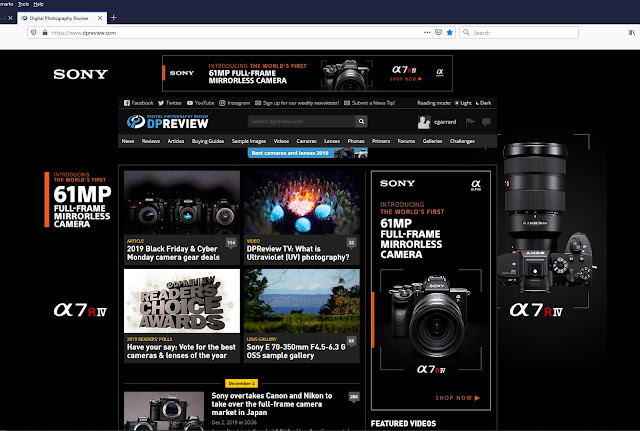 I don't know where users could get the impression that DPReview have become biased towards Sony (Screen shot from my computer). And that's just the front page today, screen shot from a whimsical last look at DPReview.

Sarcasm aside, it's tough for me to make this post. I've loved and respected DPReview even when they were criticized by others over the years, and never criticized them in over a decade of being on their site- understanding the difficulties of writing camera reviews, managing a website, and all that comes with it- especially in a declining market with minimal resources compared to its heyday.

However, lately, many of their headlines have been uncharacteristically click bait like. It's probably been longer than lately to others, but I finally noticed it to the point I couldn't even ignore it any longer, and noted that on the Sony article (best landscape camera article). Call it coincidence, but the comment section was shadowed, and I can tell you there were a lot of comments criticizing the article and DPReview's bias towards Sony- I certainly was not the only one.

It was a low point for them. And instead of owning up to it, they tried to hide it.

DPReview used to set an industry high standard, they used to be a site I admired, and I learned a lot from its writers over the years. Sadly today, DPReview is a far cry from what it used to be, without Phil Askey or Simon Joinson, it seems the site has just slowly devolved into a clickbait ad site (mostly for Sony) that seems desperate for traffic- throwing out many hail mary articles just to stay afloat (all the while mirroring Petapixel almost verbatim!).

I too have invested much time and energy in my spare time writing articles about the digital camera industry on this blog and on other websites as well. So, I get it.  But, to see a site like DPR devolve into what it is today, is well, just very sad to me. Even worse, DPR are now apparently silencing their members for asking honest questions. In my case, I just wanted to know why they shadowed comments of criticism, it seemed so uncharacteristic of them to do so. DPR has never been about avoiding punches in the past to this degree before, but apparently, it is now a new era.

To me, this is exactly the opposite of what they should be doing. Instead of serving camera manufacturers (who often provide free press trips around the globe, and more...), they should be serving their readers. Serving them, builds readership. And DPReview have lost their way, I'm sad to say.

I'm all about civil conversation. You can ask tough questions or be honest without being disrespectful, as we all should be practicing. But when a site is obviously biased towards a brand, and can't answer honest questions or be accountable to criticism, it is time to go somewhere else. At least for me. I didn't ask to be reinstated, I just wished both Carey and Richard (who both emailed me) good luck. Nothing more needs to be said. All good things must come to an end.